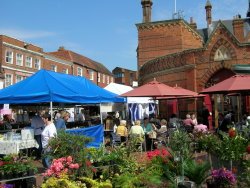 Wokingham is a small market town in central Berkshire situated between Reading and Bracknell. The town benefits from easy access to the M4 and the main line train services which run to London-Waterloo, Gatwick Airport and Reading.

Wokingham was originally on the edge of the Windsor Forest and until the last century known as ‘Oakingham’. Its past industries include a bell foundry, silk goods, leather, wool and brick making but more famously coach building. It was also famous for bull baiting and cock fighting which brought people to Wokingham from miles around to witness the spectacle which was known to get a bit rough and out of hand at times. Probably the ‘Wokingham Blacks’ who painted their faces black and committed robbery, blackmail and even murder were the more notorious inhabitants of the town. Their capture eventually led to the ‘Black Act’ being passed in parliament. Many of the buildings in the town date back to the 15th and 16th centuries giving the town its character. Close to the centre of Wokingham is the station on the main line from Reading to London Waterloo which takes about an hour and the M4 Junction 10 is approximately 4 miles via the A329M. Recently Wokingham was voted by one building society as the most desirable town in England to live.

Winnersh village on the main road between Reading and Wokingham has at its centre a railway station on the main line Reading to London Waterloo. Alongside pre war properties are new housing areas such as Winnersh Farm. Dinton Pastures is the largest park in the Borough of Wokingham with its woodland walks, seven lakes, abundance of wildlife, children’s play area, exhibition centre and cafe it offers something for all the family. There is a Sainsburys supermarket at the crossroads junction of the A329 and B3030 and a selection of shops on the Reading Road.

Emmbrook is an area between Winnersh and Wokingham named after the small tributary of the River Loddon. The area has modern family housing and Emmbrook Comprehensive School takes pupils from the primary schools in the area.

Woosehill is situated between Winnersh and Wokingham and has a large modern housing estate built in the last 20 years. Morrisons supermarket serves the area and there is a primary school which sends its pupils to nearby Emmbrook Comprehensive School.

Dowlesgreen is an area north of Wokingham and close to the A329M which gives access to the M4. Originally farmland it was developed in the 1960’s and 1970’s and is a residential area with primary schools and local shops.

Finchampstead, a suburb south of Wokingham, extends as far as Eversley. Nine Mile Ride runs across its width and includes the area known as California which has a residential area and California Park with its woodland walks, paddling pool and cafe. There are a variety of shops and a thriving community which, together with a range of properties, state and private schools, makes it a sought after area of the town.

Barkham is situated beside Finchampstead, Winnersh and Arborfield and is mainly residential with a post office and surrounded by farmland and woods.

Arborfield a small hamlet grew up around the ‘crossroads’ where, possibly due to the two Inns, became the centre for trade for the local farming community. There are new housing developments which give its residents the ability to access the M4 motorway at Junction 10, Winnersh railway station on the main line from Reading to London Waterloo. The nearby Arborfield Garrison which also has the REME Museum of Technology is the headquarters of the Corps of Royal Electrical and Mechanical Engineers.