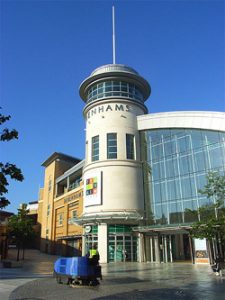 Basingstoke lies approximately 45 miles from London on the M3 junctions 6 & 7 with Southampton to the south, Reading and the M4 motorway to the north.  The main line railway service takes passengers 45 minutes to London Waterloo and there are rail services to the south, west and north of the country. However, the Festival Place shopping centre has transformed the town centre taking over from The Malls.  Sun Life of Canada, the Automobile Association, IT, Insurance, and Communication companies are located in and around the town.

Until the 1960’s Basingstoke was a market town which rapidly expanded absorbing farmland into housing estates.   New estates have become communities in themselves such as Hatch Warren, Lychpit, Chineham, Popley, Kempshott, and Oakridge.   Villages also on the outskirts of the town have seen a growth in demand for housing such as Cliddesden, Dummer and Sherborne St John.

Camberley on the M3 corridor is to the south west of London on the A30 and close to Sandhurst Royal Military Academy.  The town has a thriving shopping centre with an out of town Marks and Spencers together with Tesco.  There are two airports in the vicinity namely Farnborough which stages an international airshow annually and Blackbushe Airport which also hosts vehicle auctions and a very popular Sunday market.  A new development ‘The Atrium’ was constructed in 2006 and has residential as well as leisure and retail facilities.

Hook to the east of Basingstoke benefits from a rail connection to London Waterloo and Southampton.  Although a rural village its location on the A30 just north of the M3, has attracted companies such as Virgin Media and NTL.

Hartley Witney is on the A30 with just 5 miles to the M3 Junction 5.  A typical village with a wide main street which forms the centre of the village with a duck pond, a number of antique shops and a cricket pitch.

Swallowfield is a small village 5 miles south of Reading and on the North Hampshire boundary. Swallowfield Park was once a beautiful manor house but has been turned into private apartments.