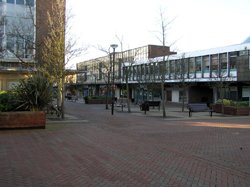 Bracknell, in central Berkshire, lies to the south of the M4 and M3 motorways, therefore, giving access to the road networks across the south of England as well as two railways stations namely Bracknell and Martins Heron which are on the Reading to London Waterloo main line.

Originally a Victorian market town Bracknell was designated a New Town in 1949 for 25,000 people which has grown far beyond its original plan and attracts many high-tech industries and where Waitrose has its distribution centre.  There are two pedestrian only shopping centres, namely Princess Square and Charles Square, with a variety of shops, however, there are plans well advanced for a major refurbishment.  The town is surrounded by a large of expanse of Swinley Woods, part of the Windsor Estate which is owned and managed by the Crown Estates and Crowthorne Woods, together with a number of housing estates which have expanded into many rural villages.  Jennetts Park on the Wokingham side of Bracknell is a new housing estate where Persimmon Homes, Bloor Homes, Redrow Homes, David Wilson, and George Wimpey are among the developers.

Easthampstead in the middle of the Windsor Forest was important in Tudor times as Easthampstead Park Conference Centre was a palace where Catherine of Aragon resided following her divorce from Henry VIII.   A residential housing estate was built in Easthampstead in the early 1950’s  which was the second such estate to be built in Bracknell.  Today there are a number of primary schools whose pupils which together with those of Great Hollands and the surrounding area, are admitted to Easthampstead Park Co-educational Comprehensive School.

Great Hollands adjoining Easthampstead, was just parkland fifty years ago but in the 1960’s, with Sperry being the largest employer in Bracknell, Great Hollands expanded rapidly to provide the necessary housing for its employees.

It is now a community with a mix of residential homes, schools, and other amenities including shops, and a medical centre.

Wildridings to the west of Bracknell is adjacent to Easthampstead and Great Hollands.  It has a residential area, primary school, shops and is close to the town centre therefore giving easy access to the main line Reading to London Waterloo station.

Harmans Water is an area of Bracknell lying between the Bagshot Road and the London Road with the RAF Staff College and Martins Heron station on the main line from Reading to London Waterloo.

Martins Heron is the most recent residential area to be developed with its station on the main London Waterloo line which has proved very popular with commuters.

Priestwood is a residential area with a mix of properties located off the main road to Wokingham.  The high-tech business parks located on this side of the town are within easy reach as is the town centre.  It is also close to the A329M link road to the M4 motorway.

Binfield is a rural village with a good range of properties which has expanded over the years and because it is located close to the A329M link road to the M4 motorway has proved to be popular with commuters whose employment takes them to Reading or towns along the M4 corridor.